After meeting at a Croydon Digital networking event, RedDoor approached Croydon Council to see how they could become involved with the community and volunteer their time to help support us with our digital inclusion work.

We worked with RedDoor to devise a series of workshops and a ‘syllabus’ for basic digital skills to help residents get online.

We decided the best place to deliver these workshops would be our local libraries. These community spaces are familiar and easily accessible, and would encourage interaction without being overwhelming.

This case study details what happened.

Croydon and RedDoor developed a series of quarterly workshops at each of Croydon’s 13 libraries across the borough. The target audience was older residents with little or no digital skills.

The sessions took place in the daytime, during term-time, worked around other groups and activities taking place in libraries. Devices and connectivity were provided

Sessions lasted 2 to 2.5 hours each and residents were encouraged to return to subsequent sessions.

Following the sessions, participants were encouraged to get help from library staff if needed. 6 months of sessions were delivered before interruption due to COVID-19.

We researched which type of device we thought might be suitable and finally decided that Chromebooks provided a good solution. This was due to their portability, screen size and touch screen features.

We also provided a mouse to anyone that was struggling to use the touch screen to ensure they got the most out of their session. The price point as well as the ‘plug and play’ nature of the devices was very attractive.

The workshops focused on assisting local residents to have the right access, skills, motivation and trust to be confident online and use a range of services.

We designed, printed and paid for posters to advertise the sessions and flyers for residents to take away with details of their session time. These were displayed in all 9 local libraries, GPs, chemists and community spaces advertising the session details, dates and booking process.

Residents secured their place by contacting their local library who managed the details for each session, or by emailing us.

Needless to say, library staff were very proactive in promoting the sessions to regular visitors and encouraging them to spread the word. Some libraries called the participants to remind them of the upcoming session that they had registered for.

Consideration needed to be given to the session timings to avoid clashing with toddler morning groups, term time, after school. It was agreed that 12pm to 2pm would be the best time of day.

Initially, it took some time to build up attendance to the sessions, largely due to lack of confidence and fear on the part of the residents.

Once they discovered that the sessions were informative yet broken down into easy to follow sections run by very friendly staff, word began to spread and the uptake steadily increased.

How it worked on the day

The libraries were instrumental in setting up an informal classroom style area for residents to be seated for the session.

The course lead talked through the content and the exercises and another volunteer was there to provide residents with one to one assistance and reassurance.

Whilst many residents were curious, it took a little while to build up some momentum and for the spaces to be filled. Some libraries proved more popular than others with full sessions. Attendance at other libraries was often determined by factors such as bad weather which discouraged residents to go out.

Attendance was starting to pick up in late February to March, then unfortunately sessions had to be cancelled due to COVID-19.

Anecdotal feedback from residents that participated was extremely positive. They felt they had benefited hugely from the sessions, they were taught in a friendly and informal way and they were keen to put their learnings into practice with support from their family and friends. 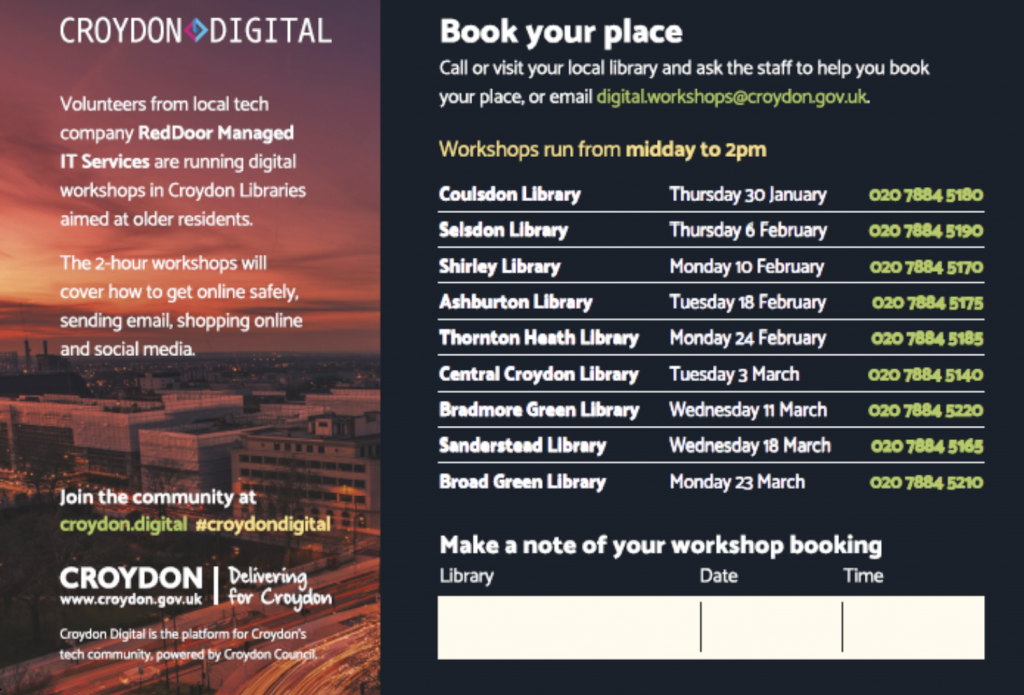 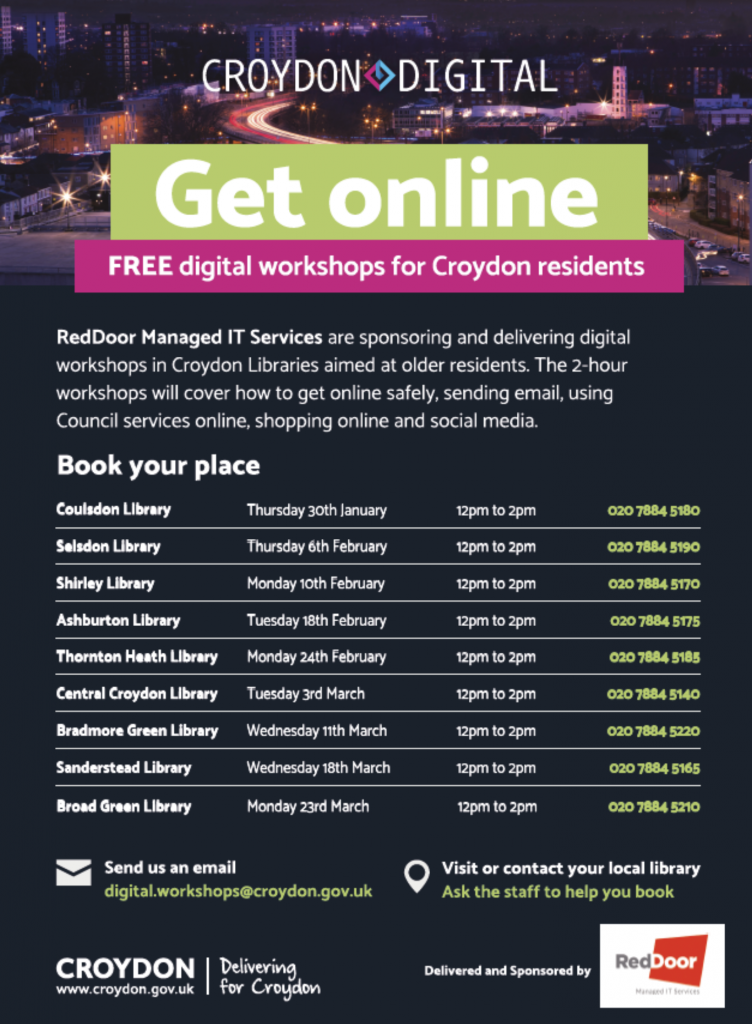 Subscribe today and get regular email updates on what's happening in the world of digital inclusion.

We would like to use cookies to help give the best online experience. Please let us know if you agree to this.

This website uses cookies to assist in core services to support your use of our website.
Necessary cookies Always Enabled
Cookies are files saved on your phone, tablet or computer when you visit a website. We use this information to make the website work as well as possible and improve digitalinclusionkit.org. To find out more about controlling and deleting cookies usage on your browser, visit www.aboutcookies.org.
Non-necessary cookies
This site uses Google Analytics to track how the website is used by recording clicks on links and information about the device used to browse the site. This site uses HotJar to record how the website is used and to collect information from users in polls or surveys.
SAVE & ACCEPT